When you book with an account, you will be able to track your payment status, track the confirmation and you can also rate the tour after you finished the tour.
Sign Up

Or Continue As Guest

When you book with an account, you will be able to track your payment status, track the confirmation and you can also rate the tour after you finished the tour.
Sign Up
15707

Why Book With Us?

Do not hesitate to give us a call. We are ready to help with all your Travel queries. You can also Whatsapp us your query.

About Buran Pass ( The Boundary Separating Kinnaur from Shimla):-Untouched Buran Ghati Trek is the less traveled, less revealed trek in the central-hills of the Himalayas. It is adorned with the most exciting river crossings, High snow walls, beautiful forests, endless grasslands, mountain peaks and villages you’ve never dreamt off. Buran Ghati is unquestionably the most amazing and adventures trek. The trek takes you to the tremendous walkway marked in the middle of snow Mountains. Where the walk ends, rappling begins, where rappling ends, discovery begins.

Note : Normally Trekkers are expected to carry their personal luggage on their own, if you wish to offload your backpack, you can give it to Mule/Porter.
Charges of offloading backpack:-
INR 2800/- if you make an online payment, 10 days in advance
INR 3500/- if you inform us after reaching Janglik
The backpack cannot weigh more than 11 KGS. Backpack should have waterproof cover. Suitcases/strolleys/ bags will not be allowed.

More About The Trek

Buran Ghati is a very diverse trek and a thrilling pass (Buran Pass) that lies at a high altitude of 15,000 feet nestled in the heart of Himachal Pradesh. This breathtaking trek starts from Janglik and is flawless because it has got all the adventures which also includes Rapelling and sliding down a snow wall.

Arguably, Buran Ghati is a pure diamond hiding in the hills because of its unmatched adventure and beauty!

Day 4: Short Hike to Chandranahan Lake and Return back to Litham Campsite

Note: On Day 7, you’ll reach Shimla between 10 pm and 11 pm. You can book your travel any time after 11 pm or stay overnight at Shimla (At your own cost).

Janglik is the base camp of Buran Ghati Trek. We start our journey from Shimla which is around 10 hours away from the base camp— Janglik. Though a little long, the scenic drive from Shimla to our base camp is totally worth the distance. It is breathtaking how the roads run alongside a beautiful river and the scenery starts changing itself into something even prettier as time passes by as if to please its visitors.

As we drive from Shimla and pass via Rohru, we witness several small villages which beautifully carry their culture and history within the simple architecture of their houses and surroundings. Rohru is the last spot where you will find an ATM and also, after crossing Rohu you will barely find any network in your mobile phones. Tanglu can be reached following a dirt path soon as we cross Chirgoan. Thereafter, the dirt path dips into the river and takes us across to Diude. A little walking is incorporated from Diude to reach Janglik. Dinner and overnight stay at Guest house/Home stay.

Start your trek by coming out of the wheat fields, and bid goodbye to the last few Diude huts. Further you gain altitude and Tangle, Diude and other pretty villages can be seen clearly along the way. Enter the forest of pine and oaks and ascend gradually.

After half an hour of trek, the tree line recedes and you come across stretch of meadows. Climb up and reach the hill with mountain views on one side and lush trees on another. From here descend gradually on a wide trail.

After an hour again enter the dense pine and oak forest, walk under the shade of trees, listen to the crumbling of leaves and move further.

Before reaching Dayara the trail climbs up gradually. You will cover a total distance of 4Kms in a span of approx 4-5 hours. After reaching the campsite and stay overnight in tents.

After having breakfast at the campsite, explore the Dayara meadows in the morning. Today, the trail from Dayara to Litham goes through thick forests, alluring green meadows and clear streams. Through meadows trail head towards Gunas Pass and after fifteen minutes enter the pine forest. Cross a stream and exit the forest section with delicious views of Dhauladhar range and Gunas Pass.

Ahead the grasslands look wonderful and magical, after half an hour the trail makes its way through another forest of Bhoj. Descend through this section and reach a stream from where Litham is clearly visible. The trail after the meadows goes to Chandranahan stream which needs to be crossed before reaching Litham.

After crossing it and reach your campsite, there are plenty of streams across Litham. From here get mesmerized by the mind boggling mountain views. Towards left you can see the Chandranahan Waterfall and ahead lies Chandranahan Lake. Towards right are cliffs with snow patches behind which lies Rupin valley and in front are snow-covered mountains at their back lies Buran Ghati.

This is the last meadow on this trek, a wider one. Camp here and relish the beautiful views.

Today, We’ll start early in the morning as there is a steep ascent and descent. After having, breakfast we’ll be heading to the Chandranahan lake for an acclimatization walk and will be coming back to Litham campsite by evening. It is a very exciting and beautiful walk where you’ll be getting a chance to click a lot of pictures along the way. We will continue walking upstream towards the waterfall from where it originates.

You will also get a very good amount of snow in the month of May and June. As you reach the lake, you will notice that the lake is a bit smaller in size and is fed by the snowfields around it. You can spend some time around the lake and click pictures of the panoramic view it has to offer before heading to Litham again. It will be a steep descent to Litham, therefore, you’ll be starting early in the morning so that you reach Litham by lunch.

After breakfast, the Buran Pass will be visible on the way while we trek to Dhunda. Dhauladhar range and Gunas Pass can also be seen enroute.

Pabbar river descends rapidly and the trail gets sharply an ascending one. The trail turns to a gorge valley when you follow the river’s left bank. From here, Buran Ghati comes into sight. The shepherds trail will lead you to the Dhunda campsite.

After one hour of climb, you will reach Dhunda’s ridge top. You can enjoy the clear and magnificent views of Buran Ghati from there.

The campsite lies amidst snow-capped mountains from all the sides. Even in late June, you can find the patches of snow everywhere.

This is the most exciting, challenging and nerve-racking day of the trek. Begin early in the morning for the River Camp. In Pre-Monsoon months, the pass is fully covered with snow and it is a bit difficult to pass, but in Post monsoon months, i.e, September and October, The snow melts making it easy to cross the pass. The trail goes is strewn with several boulders near the base of the Buran Ghati pass, from where the pass is an hour’s climb, almost entirely on snow. Now comes the best part – the seemingly lethal descent down to the other side. The climb down is extremely steep, and cannot be attempted without a rope. An ice-axe might really come in handy here. The first 100 meters is the real challenge, following which you can choose to slide down the smaller, gentler slopes.

Given the sharp descent, you lose considerable altitude, nearly 3,000 ft., quite rapidly. Two hours later, the snow line ends and the trail dips down to clusters of juniper and some lovely shrubs. A sprawling blanket of greenery rests on the entire valley, beyond which you can see tall, towering mountain ranges dominating the skyline. An hour’s descent and a stream-crossing later, the River camp greets you, right by the first few huts.

The trail to Barua village entails stunning diversity of vegetation, coupled with stark changes in scenery. Follow the widest of the trails tailing the Barua Khud, as it meanders through beautiful mixed forests. Within 2 hours, you will reach a makeshift bridge guided by the lovely junipers that mark the way. Once on the other side, treat your eyes to a criss-cross of lovely floral purples. Soon, you come across the first of apple orchards. Multiple apple and other orchards greet you as you reach Barua.

From Barua, you’ll be driven back to Shimla, where you can expect to reach by 10:30 PM. You can book your travel any time after 11 pm or stay overnight at Shimla (At your own cost).

Things To Pack For The Trek 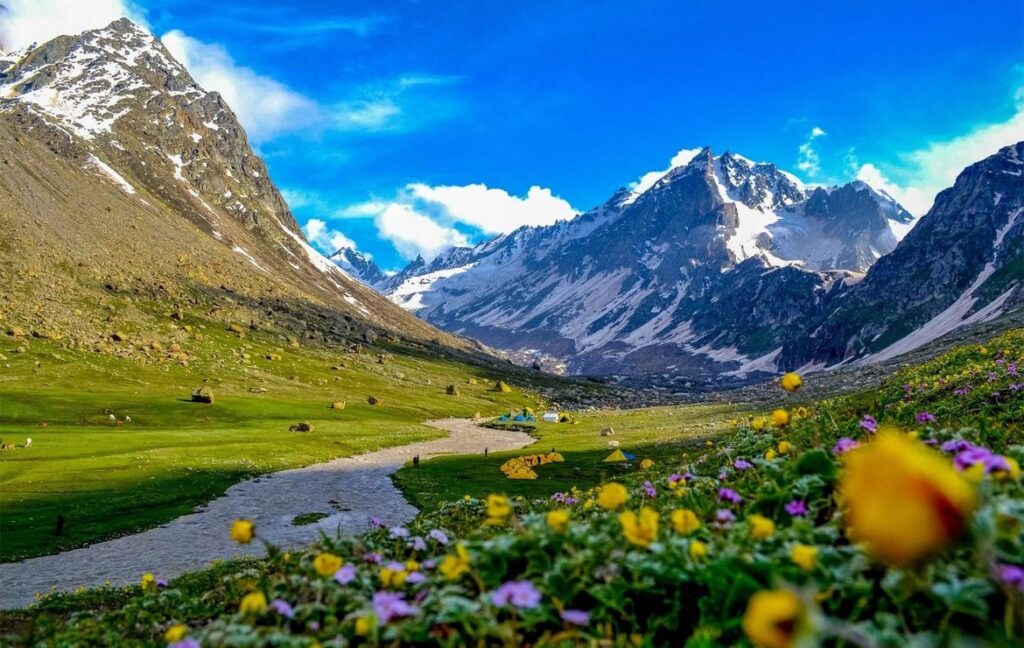 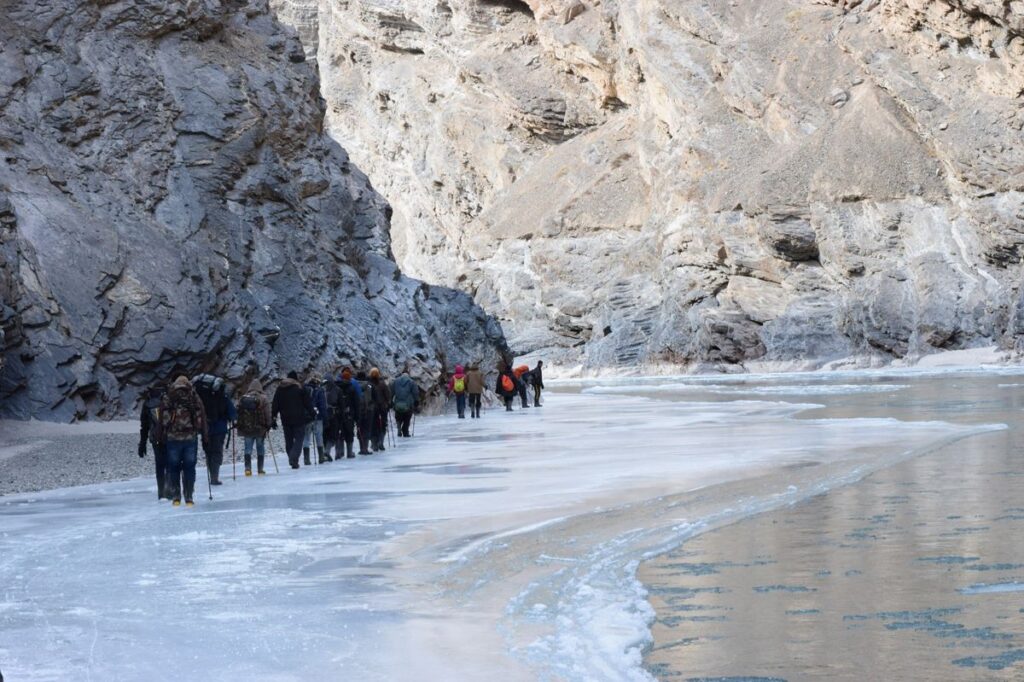